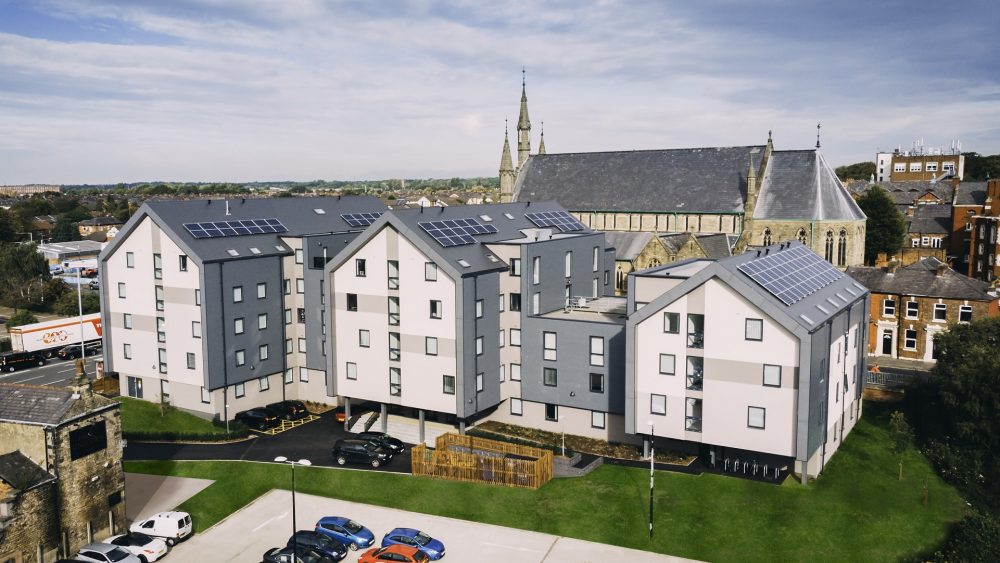 A multi-million-pound student living development that aims to promote healthy lifestyles and wellbeing has been completed in Preston.

The 191-unit Canterbury Hall scheme, developed by Fraser Morgan, is located off North Road close to the University of Central Lancashire main campus.

All units in the £15m development, built by Warden Construction, have been sold to investors and the building is almost fully let. It will be officially opened during a launch event next week with the aim of redefining student living in Preston.

Designed by David Cox Architects, the development features large communal areas for relaxation and socialising, including a roof garden, lounge and cinema room. Its rooms are 24 square metres on average and include a double bed, kitchen and dining space.

Mark Robinson, managing director of Fraser Morgan, said: “This is student living with a difference. The building has a luxury feel to it, but it’s much more than that. We did a lot of research when coming up with the wellbeing aspect of our offer.

“We’ve looked for ways to help students interact more and give them a feeling of spaciousness, whether that’s escaping to the roof garden to do some yoga and mindfulness, or meeting friends in other communal areas.

“We’ve thought carefully about interiors with all the desks placed under large windows to allow natural light and give the students time for quiet contemplation while they study. The dining space allows them to have friends and family come and visit them. We’ve also brought some greenery into the development with natural moss wall installations.”

David Cox, director at David Cox Architects commented “Situated between two listed buildings, the design of this five-storey development successfully negotiates a change in scale from the monumental church on one side, to the much smaller pub on the other.

“The internal space has been very carefully considered to accommodate large living and communal areas. The speed at which these properties were let demonstrates the demand for this exemplar quality of student accommodation in Preston”.

Rooms within the Canterbury Hall development start from £125 per week, which also includes access to an on-site concierge service. The NHS have also leased on long term lets a number of units at Canterbury Hall to accommodate overseas doctors and consultants working locally.

See more images of this development on our portfolio page.